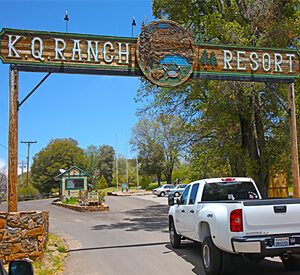 Long before the Julian California Campground was created, KQ Ranch Resort was named for the King and Queen Mines – rich gold strikes discovered in 1888 – K.Q. Ranch holds claim to part of the colorful history of the Julian District.  Joseph Hamilton, R.G. Melrose, and F.E. Feeler made the first gold finds in the K.Q. Ranch area, tapping a vein that breathed life back into Julian California’s mining ventures.

Although the Spanish had noted gold washing down from the mountains as early as 1602, the discovery of placer gold in Julian by A.E. (Fred) Coleman in 1869 sparked San Diego County’s real gold rush.  That same year the Bailey brothers and their cousins, the Julians, arrived from Georgia to seek their fortune.  Estimates of the total value of gold taken from the Julian District range from five to thirteen million dollars.

(Historical Information obtained from Mines of Julian (1972) by Helen Ellsberg)

No less an attraction to Julian than gold, apples trees – first planted in the 1870’s – draw visitors to enjoy the produce of area farmers.  An active community, Julian area residents and businesses work hard to make this a great place to enjoy country living any time of the year.  To learn more about the fascinating history and geology of Julian and the Cuyamacas, visit the museums of the Julian Historical Society and Cuyamaca Rancho State Park.

Population The historic townsite of Julian has approximately 300 full- and part-time residents. The surrounding area of desert and hills boasts a population of 3,000.