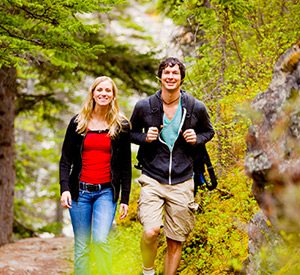 The Pacific Crest Trail (PCT) is one of America’s most beautiful and scenic hiking trails, spanning 2,650 miles from Mexico to Canada through three western states. From the deserts of the Southwest to the glaciers in the Cascade Range, hiking the Pacific Crest Trail provides breathtaking views, worthy geological sections, and glimpses of wildlife not seen anywhere else.

Because of the trails’ qualities, thousands of hikers and equestrians enjoy it every year, whether it be a few miles or its entirety stretching up through Canada.

In the late 1930’s, the trail was first explored by teams from the YMCA. Pioneers Clinton Clarke and Warren Rogers then asked the federal government to secure a border-to-border trail corridor but settled only for several disconnected trails along the crest of each state. By 1968, the PCT was finally became one of the first scenic trails in the National Trails System and in 1993 it was dedicated.

The trail portion most accessible to those on vacation in Julian, CA with is the Southern California section which passes through Lake Morena County Park and beneath Interstate 8, to the rim of the Laguna Mountains. The trail dips into the Anza-Borrego Desert State Park at Scissors Crossing, then around the San Felipe Hills and mountains of the Cleveland National Forest before crossing Highway 74 at 4,900′ and climbing the backbone of the San Jacinto Mountains. It reaches its highest point in this section at 9,030′ shortly before it plunges to its lowest, crossing beneath Interstate 10 at (elev. 1,190′) in broad San Gorgonio Pass.

We know you will enjoy hiking this amazing portion of the Pacific Crest Trail as much as you enjoy camping around the various California State Parks in and around KQ Ranch Resort. Between our great amenities, and rates plus our nature filled grounds and the trail itself, you will have a great memorable stay during your Julian CA vacation filled with the chance of seeing humming birds, lizards, snakes, and coyotes. The plants are generally desert scrub, chaparral and some oak as you get into the higher elevations. Be sure to bring plenty of water, especially during the summer months when temperatures around Julian CA can get into the 80’s to the low 100’s.